The Kaizen Sensei Speaks about How Cryotherapy Helps Relieve Pain 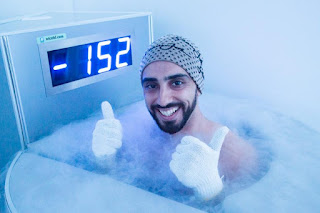 One thing I did not address is why do we feel pain?

Here is the kindergarten version.

We feel pain because the brain recognizes an problem with our body.  It could be acute, meaning like, something happened all of a sudden, like a hammer making contact on a thumb initiating a flurry of expletive deleted with grandkids admonishing me by saying, "Papa!  That's not a nice word!"

Then we'd have those nagging type of pains that don't go away.  You know what I'm talking about: the bad back, bad neck, bad knees, bad attitudes.  For example, I injured my back years ago and for all reasons that I can't understand has not completely healed; and, every morning, I wake up to a reminder "your back hurts!!!.

So what we have are anamolies in our bodies that send signals to our brains, telling us that something is wrong and it creates a response that is, not only uncomfortable, but hurts in a degree from three (mild annoyance) to 10, which in the latter, sucks big time.

Of course, this is something that's not new, and I wanted to sound somewhat informed before I go further.

You're gonna like this next piece and wondering why I'm flop flopping ideas.  First, because I think this next topic is pretty cool (or c..c..c..cold, brrrrrr). Second is because I'm the writer, and when I write, I do my best when I just let the juices of creativity take over.

Today, I'm going to introduce you to something called…

Check out the video.


Here are the claimed benefits 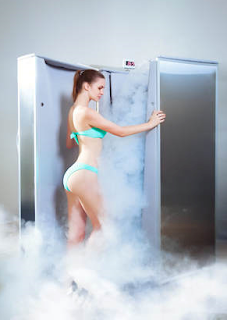 So what we have here is a process where you freeze a major part of your body in this coffin like box for a couple of minutes and when you get out, your body fixes itself magically.  It kind of reminds me of when I blew my knee out during a game between my alma mater Delano High and Arvin high, when this POS purposely aimed for my knee. I ended up being incapacitated.  The treatment plan, saved for a primitive form of knee surgery that left a scar from the middle of my belly button to the bottom of my left toe, which wasn't gonna happen to me, was for me to stick my bad leg into a garbage bag full of ice for five minutes, pull out for five and repeating the process three times, three times a day, till the swelling goes away.

Let me tell you, sticking your swollen leg into a bucket of ice produced more pain than the actual misplaced tackle.  Excruciating was more like it.  Long story was that ice or "freezing" the injured part of your body was practiced for a long time, but this high tech shiny penny cryotherapy has picked up traction in spas, gyms and various treatment facilities which include chiropractor clinics.

I cannot back up any of its claims, nor will the FDA provide information regarding its role in the medical community.

After researching, there are more of these cryotherapy facilities than you'd expect locally, and from what I've seen in YouTube videos and read from blogs and posts, it appears reasonably safe. But then, after saying that, I did read an article regarding a salon worker who died in one of these chambers.  See Cryotherapy Death.  So it's not without its risks!

Cost vary per treatment, but I've seen it on average about $35 per session. 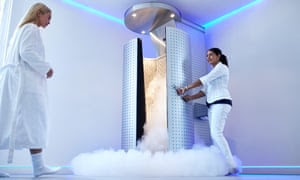